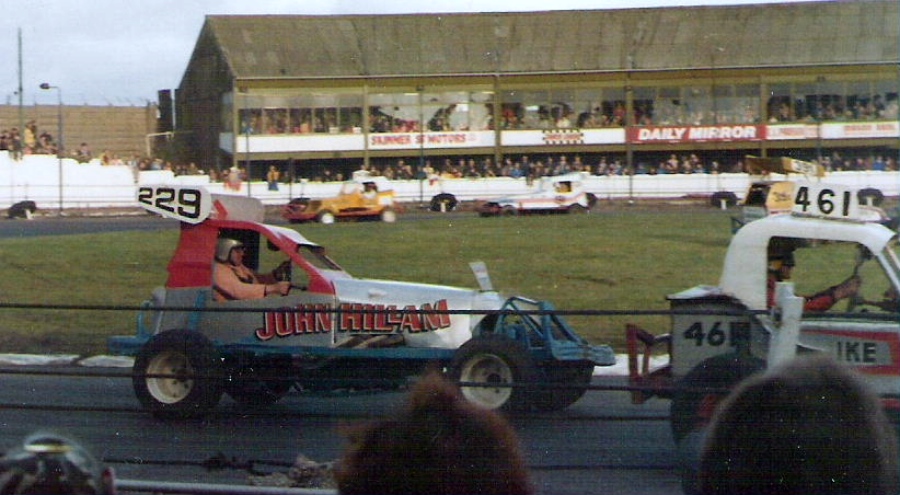 Hartlepool album now created and open.  This includes the 1986 Semi-final.  At the same time I’ve added pictures from the 1989 Semi-final race at Northampton.  Both are mainly from the drivers pre-race parades and rolling laps.

The race took place on 17th August 1986.  A first bend coming together took the front runners out of contention.  BriSCA only launched the gimmicky Consolation Semi-Final 2 seasons later so 2nd row starter Bobby Burns  ended his world title challenge on his roof.  The top 3 came from the 6th row and beyond.  Pole-sitter Mike Close 199 recovered to 12th but still did not qualify.

This race was on a sunny Sunday afternoon on 23rd July 1989.  With a place in the world final at stake semi-final races can be follow my leader affairs.  The first 3 across the line came from the first 2 rows.  Danny Clarke from the inside 2nd row dropped to 5th with Frankie Wainman Jnr being the main mover progressing from row 8 to take 4th.  Victory in the semi-final gave Ray Tyldesley his 21st win of the 1989 season and set down his marker that  he was going for the gold.

As you may have noticed, Aycliffe has a very special place in my heart.  I’ve added a little history of the track to the album.  I make no guarantees on the accuracy as I have only been on the terraces and have no on track or back room knowledge or experience.

The collection of the raced under the family name now has its own album.